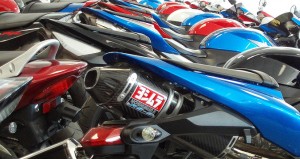 Loud pipes save lives. That’s a saying the the motorcycle community. Here is the thought process:

In my first outing with the PSB group on an organized learner ride (a group ride designed to give people new to motorcycling practice in a safe environment), I was picked up by a member (in Australia, you can ride a motorcycle without a license as long as you have a “shadow” to follow you). His bike was fairly loud both in sound and in color. I don’t think he had an aftermarket exhaust but it was a heck of a lot louder than my bike. On our way to the meet point, I watched as he allowed a car to pass in front of him, the lady waving her thanks. Half a block later, she almost merged into him. He revved his motor and the car jerked back into the proper lane.

Evidence of the Loud Pipes theory? At the time I thought so.

Motorcycles, in general, are loud. Whereas your car probably idles around 1000 RPMs and has optimal performance between 4,000 and 6,000 RPMs, the bikes I’ve been on idle closer to 1,500 RPMs and have optimal performance between 6,000 and 9,000 RPMs. Where your car might redline at 8,000 RPMs, a bike might not until 11,000 or higher! That alone makes them sound much louder than cars.

Most bikes (at least street bikes, I can’t speak to Harley’s and other cruisers), don’t come from the factory with overly loud pipes. They may be loud, but they are loud in the same way an upgraded factory stereo is loud. I’m sure there are many reasons but keeping the bikes compliant with local noise ordinances has got to be one of them. Those obnoxiously loud pipes are generally aftermarket additions. They are sold on the theory that they make the bike safer.

Now, I could just direct you to this link (you should read it) but here is the TL;DR version.

Loud pipes are annoying. When I ride with a group, I always have to bring earplugs because someone will have a loud bike. While I don’t mind the sound in small doses, over time, it is not only annoying, but can damage your hearing. As I make a good bit of my living with my ears, I can’t take any chances with my hearing.

To the motorcyclists out there – what do you think of those cars with the bumping stereo systems? Because that’s what most people think of your bike. The AMA (American Motorcyclist Association) has said that “few other factors contribute more to misunderstanding and prejudice against the motorcycling community than excessively noisy motorcycles”. Basically, you are making us all look bad.

But, more than that, what evidence is there that they actually increase your safety? The AMA has reported that the vast majority of the accidents happen from the front of the bike, not the back where the sound might actually help. When I was taught to ride, the mantra was, “Your safety is your responsibility.” If you are counting on drivers to hear you to keep you safe, you’ve already made some drastic mistakes.

But, really, I don’t think this safety thing is real. There are tons of products that are sold because people want them for reasons that are just rationalizations. People that like motorcycles like the sound of motorcycles. They want a motorcycle that sounds that way. The “saves lives” part is totally optional for most of them. What they really want is the “loud pipes” part. Any rationalization will do.

Since this is a “why” article – why are some motorcycles so loud? At best, the motorcyclist (erroneously) believes they are making themselves safer. At worst, they are nothing more than those kids with the bass rocking your dishes as they drive past your home.

As an aside – I borrowed a friend’s bike for a week a while back. He has aftermarket pipes on his bike. I had to wear earplugs when riding because of the noise. While I got a few thumbs up from motorcycle enthusiasts in cars, I had many more problems with people trying to race me off stop lights. For that reason alone, I think loud pipes can actually make riding a bit more dangerous as it seems to be a mating call to the hoons out there.