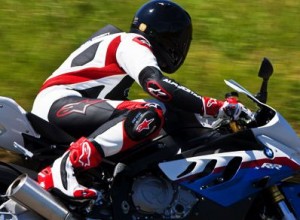 You may have seen motorcycle riders in the movies (or around town) wearing leather jackets or vests with a ton of patches on them. It is very indicative of the Harley/outlaw biker mystique. I have never been interested in that type of bike or that type of style for that matter. I don’t know if it was all the anime I watched as a kid (Akira anyone?) or what it was, but the sport bikes have always appealed to me. Honestly, it doesn’t matter what type of bike you prefer – sport, cruiser, off-road, or even scooter – gear is between you and the ground, not you and your bike preference.

When I was a kid, I met a guy at the park down the street. I was young so I probably shouldn’t have been talking with him but I did. He rode a motorcycle. I asked him about his helmet. He said he didn’t wear one (I doubt there were helmet laws at the time). His reasoning was because a helmet can snap your neck if you land wrong. Even at my tender age (whatever it was), my first thought was that a snapped neck was better than a smashed head.

Before I started riding motorcycles, I would see guys in full racing gear and think they were some sort of poseur. That “real” motorcyclists wouldn’t be caught dead in that crap. That was, of course, before I ever got on a motorcycle. Now that I have, I understand.

There is a saying in the motorcycle community – you are the crumple zone. If you don’t understand what that means, read it again.

Anything you can do to protect yourself is huge. Sure, a basic leather jacket is better than a t-shirt, and jeans are better than shorts, but responsible riders, the ones that have kids to come home to, wear much more. Even if you see a rider in an over-sized leather jacket and jeans, you may not realize what you are seeing.

Look at the jeans. Do they seem to have unnecessary stitching? That’s probably because they are lined with Kevlar. Kevlar is routinely put at the knees and backside to protect from slides. Some will have pads that can be inserted for additional protection. Some will have full Kevlar lining and pads. Depends on the brand/model.

That over-sized jacket may be leather or ballistic nylon. It likely has shoulder, elbow, and back protection (pads and/or armor). The gloves might have carbon-fiber over the knuckles, padding on the wrists, and much more.

So, obviously, the gear is about safety. The more the better. Often this safety comes at a price. People see someone in full racing gear (the sort of stuff that will protect you from even high-speed slides) and make assumptions that they are out to ride unsafely. That’s exactly the opposite of what they should be thinking.

After riding a motorcycle for only a few months, the last thing I want to see is a motorcyclist with no protective gear on but a helmet (there are helmet laws here but I know many places don’t have them). There is a motto in the street bike community – ATGATT. All The Gear All The Time. Sure, it’s a pain to put on when you are just running down to the store, especially when people are going to give you odd looks for walking around essentially wearing armor, but it is your life you are trying to save.

For everyone else, when you see someone in full motorcycle gear, don’t frown at them as if they were some sort of freak or hoon. Instead, realize that they are being as safe as they can in an inherently unsafe activity. Would you look down on someone for putting on a seat belt or turning on their wipers in the rain? It’s the people riding in flip-flops and bathing suits you should be concerned about.

Now, there are people that will wear minimal gear when buzzing around town and then gear up for “spirited” rides. While I appreciate that they are protecting themselves, I obviously can’t support their decision to ride “spiritedly” on public roads. There are times and places (namely track days) where such riding is appropriate. City streets – even apparently empty ones – are not the place for practicing your cornering. Like many motorcyclists, I love a twisty road but the speed limit (plus/minus a few 🙂 ) is more than fast enough. If you want to push your limits, take it to the track. You’re giving us responsible riders a bad name.