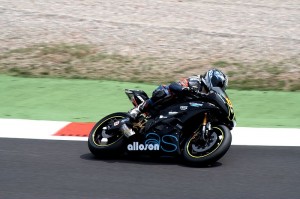 If you ask someone that rides motorcycles why they do so, you may get a variety of answers. If you let them talk long enough, one of the things they will probably list is speed. Even at low speeds, being on top of a motorcycle makes it feel like you are flying down the road. For some people, namely irresponsible and (usually) young, this is very near the truth. But for more responsible riders, like me, the “speed” is more a “sense of” rather than an actuality. I don’t ride any faster than I drive and yet the sense of speed is a big draw.

Before I started riding, I found motorcyclists to be very uncomfortable to be around on the road. Often they’d be near (usually in front of) me and keeping pace with traffic. Then, with a twist of the wrist, they’d shoot forward quickly to a new position and slow down again. This seemed at best distracting and at worst dangerous. Why were these motorcyclists acting so erratically?

Turns out, I wasn’t paying as much attention to my surroundings as I thought. If I had, I might have figured it out for myself without having to get on the back of a bike to discover the truth.

Every driver knows what they are. A blind spot is the part of the road that your peripheral vision and mirrors don’t cover. If you’ve ever been behind a semi-truck, you’ve seen the stickers showing you where not to place your car. If you are a sane driver, you don’t. Because you know if that semi decides to change lanes and doesn’t see you, you’re dead. Not, “Oh, I got in a fender-bender on the way home from work,” I’m talking “flat as a pancake” dead. Unless you are driving a tank, that semi may not notice it’s hit you until it’s parked its back wheels on top of your head.

When riding, I try and find a spot on the road where I know the people around me can see me or that I have enough space around me to react to avoid an accident if they do something to endanger me. This means staying out of blind spots, making sure (as much as possible) there is no one next to you, and keeping a close eye on traffic patterns. But if you are going to pass someone, you’ll end up in their blind spot no matter what you do. The key is to minimize that time. Thus the speed.

This is how many motorcyclists think when they are in traffic: 1) Ride in a safe spot. 2) Identify your next safe spot. 3) Get to #2 as fast as possible. 4) Look for the next safe spot. Repeat. This minimizes your risk on the road.

Now, the only other time I will change my speed dramatically is at stop lights. Something about a motorcycle at a red light does crazy things to some drivers. Sometimes it is innocent. They see a vehicle (this case, a motorcycle) going faster than them and they want to catch up. Sometimes it isn’t so innocent. They spent a ton of money on their car and they want to show that they can beat a motorcycle off the line. Either way, red lights often turn into mini-races for motorcyclists. Here is how I deal with it.

First, I try and identify if someone is going to try and race me. Understand, I’m not racing – they are. I just want to know if someone is going to try and chase me down. If so, and if I’m filtering and in the center of the lane, I make sure I merge into the opposite lane after the light turns green. I then speed up to 5-10 kph over the speed limit (I’d probably do 5-10 mph in the States) as quickly as possible  If I hear an engine roaring up behind me, I let off the throttle and drop back down to the speed limit.

Invariably, the car screams past me as I slow putting the hoons in the car where I can see them and all the other drivers (the normal ones not trying to chase down a motorcycle) behind me where they can see me. In the case where I don’t think anyone is trying to race, I speed up to the limit quickly which puts me far in front of traffic where I should be easily noticeable by the other drivers.

While the changes in speed can be a bit disconcerting for other drivers, if you recognize what motorcyclists are doing, they are easily understandable. It’s all about minimizing risk and maximizing safety. For a motorcyclist, it is putting themselves in a position to be noticed.