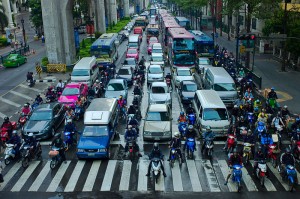 For long-time followers of me in my various online mediums, you may have heard that I started riding a motorcycle. If you want to know why, feel free to read my post on the PSB (Perth Street Bikes) forum here. The short version – because my wife said so.

Probably like you, I was fairly ignorant of the differences between motorcycles and cars before I started riding. To me, motorcycles were just two-wheeled cars that tended to attract hoons wanting to ride fast and die young. I’d see them weaving in and out of traffic, speeding past at incredible speeds, and generally being unsafe. While this is sometimes true, there is an awful lot of ignorance out there about what motorcycles can and can’t do and why motorcycle riders act in specific ways.

I’m going to start this series of posts with a common complaint car drivers have of motorcycles.

Filtering is when a motorcycle cuts between cars that are stopped (usually at a light) in order to get to the front. This is different from (and often confused with) splitting which is when they do the same thing but when cars are moving. The laws governing filtering vary from state to state, country to country. In Perth, Australia, where I now live, it is legal but you have to do it in a specific way. I’m not going to go into all that. Instead, I’ll tackle the whys.

When I lived in Los Angeles, I remember having a conversation with someone (I think it was my wife) about filtering. A motorcycle went by as I was stuck in traffic (a common occurrence in LA) and I lamented that I hated when they did that. Probably said something about how it was against the law (though I clearly had no idea if that was true).

The response was that it was legal because motorcyclists that sit in the fumes of the exhaust of the cars could get dizzy/lightheaded and they needed to be able to keep moving. That made sense to me so from that moment on, I stopped complaining about it and tried to keep out of the way of motorcyclists filtering next to me.

Now that I’ve been on a motorcycle for a while, I can tell you that, while the above reason is true, it is not the most important one. When you are on a motorcycle, you are really out in the elements. That helmet might look tight, but it certainly isn’t keeping out any of the smells. When I am riding behind you, even at 35 mph, I can tell if you are smoking and if it is a cigarette, clove, pipe, cigar, or something illegal. I can tell you what the restaurants are cooking, how much the air temperature changes from block to block, and much more. Sitting in traffic, especially behind a truck or other vehicle with lots of exhaust, can be an absolutely nauseating experience. The fumes are nearly unbearable for any length of time.

On top of that, on a motorcycle you are sitting on the engine. The air-conditioning (or temperature control) is movement. On a hot day, you are practically cooking while you are sitting. While some motorcyclists feel comfortable in shorts and a t-shirt, I’m pretty attached to my skin so I always wear protection. And protection is hot. Fine for winter, but terrible for summer. Sitting in traffic is a quick path to heat exhaustion.

But the most important reason, and the only one that justifies filtering in my mind, is safety. People in cars don’t see motorcycles. Around here, they call it the SMIDSY defense. Sorry Mate, I Didn’t See You. Filtering gets you to the front of the stopped traffic where a motorcycle is easily seen. Motorcycles, even the under-powered overweight ones, will have no problems keeping to the front of traffic so they won’t be slowing anyone down. This forces the cars behind to see the motorcycle and reduces the chance that someone will merge into you trying to get five feet farther up the road.

So, why do motorcycles filter? To reduce the chance that they’ll die because a driver didn’t see them. The problems arise when motorists mistakenly think that they should take the law into their own hands and stop lane filtering. In this report done by the Office of Transportation and Safety in California, 7% of drivers admitted to actively trying to stop splitting.

That’s splitting, not filtering. Splitting is when both vehicles are moving. The only way to stop that is to ram the motorcycle (or at least threaten to). Note – in California, it is legal to both split and filter.

While the reasons for splitting are similar to those for filtering, I, personally, have never felt it necessary. Of course, Perth traffic isn’t in the same league as LA. But, with 7% of the drivers willing to freely admit to a surveyor that they attempted vehicular manslaughter, those aren’t odds I like.

3 thoughts on “The Why’s of Motorcycles: Filtering”