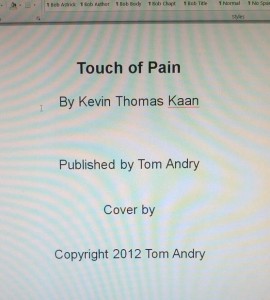 I hope you’ve assumed that the reason this blog has been so quiet is because I’ve been hard at work. That is very, very true. But I owe you an explanation of what has been going on. For those that are waiting with baited breath, Bob Moore: Hostile Territory has been completed and is in the editing process. What does this mean? Well, I wrote it, let it sit, read it and edited it, let it sit again, read it and edited again, and then sent it off by my primary beta reader.

There were some organizational issues, some stuff that needed to be cut, and a lot of tone tightening. So, it was back to the grindstone. I finished a new version (number 2 by the way I number them), and sent it back to him. This was received with more enthusiasm and the editing began in earnest. We traded a few versions and notes and I ended up with a version 4. That went out to two different beta readers simultaneously.

At the same time I started working on a fantasy novel. For those of you that read my Note from the Author (or whatever I called it, can’t be bothered to look it up) at the end of Bob Moore: No Hero, you know that I used to have the Chapter 6 problem. I had a tendency to get stuck on chapter 6. Well, the fantasy book was the first book I ever attempted to write. But I was wrong, I didn’t get stuck on Chapter 6, it was Chapter 3. So…that sort of sucked.

Anyhow, I couldn’t decipher my notes/outline about the plot so I had to start from scratch. This book is written in third person which, after all the Bob books which are in first, was a very hard change to make. Honestly, it was a struggle to work on this book and I had to force myself to get it done. In the end, I warmed to the book and the characters, but for the first two-thirds of the book, I had to make deals with myself in order to get the motivation to write. I wanted to finish it by July. I managed it by August 1st.

Well, it is now completed in the sense that it has a beginning, middle, and end and that there are nearly 60k words in the document. But to call it a “rough” draft is akin to saying Bob is “a little” bitter. It needs a ton of work. Massive amounts. But the bones are there.

I needed to put Bob aside until I got a draft of the fantasy book so that I didn’t have to make that third person shift again. While I was finishing the fantasy book, both the two beta readers got their notes back to me but I’ve refused to look at them until I finished the fantasy book. That means that Bob will be up next on my “to do” list. Probably some time next week.

My working title for the fantasy book is “Touch of Pain”. I haven’t officially written the blub but, what the hell, I’ll try something now. Don’t hold me to this:

Since Cassian was a child, any contact with his skin, no matter how light, has caused him intense pain. Cassian has asked the gods for relief from his condition, but so far they have not answered his prayer. But when he bumps into an old man, all that changes. Not only can he be touched, but he can see strange, black-eyed people that the other inhabitants of Kuralduzen cannot. What does it mean? Are the gods telling him that his curse will be lifted soon? And who is this strange old man that no one but Cassian can see?

That’s crap, by the way, but it gets the point across. People have asked about the pseudonym. I’m toying with the idea that I’ll use different names for different genres. I’ve been told (and seen evidence) that this is a fairly common practice. I’m not totally convinced but I do like the name Kevin Thomas Kaan (the middle names of my three sons in order of birth).

In other news, I posted Bob Moore: No Hero and my short story Fresh Air over at Wattpad. They liked it and decided to feature it this month. If you haven’t checked out Wattpad, it is a place where people can post their original work and have others read it. You can access the content online or through one of their apps for your phone or tablet (that’s how I discovered them). There are thousands of stories, poems, and more over there. The quality varies but if you are a fan of a particular genre (specifically one that is underserved by the mainstream publishers), this may be a good place to get your fix. I’ve also written a short blog post for them that you can read here.

4 thoughts on “Wattpad Feature and Other Writing News”